Sunday, 18 October 2020 _US President Donald Trump has declared during a campaign rally in Florida that United States now possesses hypersonic missiles, vowing that his administration will maintain an unrivalled military might. 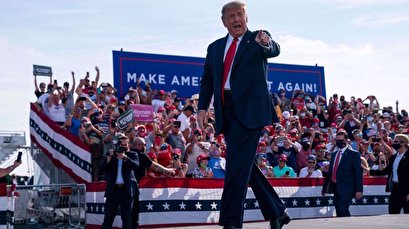 We have the hypersonic missiles that you used to hear about. We didn't have them because other countries were stealing our plans from the Obama administration, but we now have hypersonic missiles", Trump claimed during the Friday event in the city of Ocala as quoted in report by Sputnik News.

Trump also boasted about possessing the weapon back in May, claiming that the US has what he referred to as "the Super Duper Missile," which he said is "17 times faster than what they have right now."

The US launched earlier this year an accelerated effort to develop hypersonic missiles -- which fly at speeds between five and 20 times the speed of sound -- in response to successful development and testing of the technology by its top military rivals, China and Russia.

The development came a day after the US Defense Department announced it has designated the Naval Surface Warfare Center in the state of Indiana as the primary base for developing hypersonic weapons.

It further stated on Thursday that the center will allow scientists and engineers to leverage earlier and ongoing investments to help US military services develop hypersonic weapons with more rapid, adaptable and modular upgrades, according to the report.

Trump’s claims, which has not yet been confirmed by the US Defense Department, came 10 days after Russia announced its successful test-firing of a hypersonic cruise missile.