Sunday, 18 October 2020 _A delegation from the United States is set to visit Israel, Bahrain and the UAE on October 17-20 amid normalization brokered by the Trump administration. 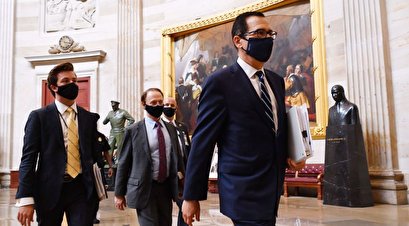 Treasury Secretary Steven Mnuchin will lead the US delegation, according to the department.

The United Arab Emirates and Bahrain have signed agreements to officially hold relations with the Zionist regime.

US President Donald Trump, who is running for re-election against former Vice President Joe Biden, has recently taken his campaign as far as Israel.

“You have to thank Trump” read posters in Hebrew on minibuses in Tel Aviv this week, according to Reuters.

According to the news agency, Israel matters in the November 3 election as many “American-Israelis are registered in swing states such as Florida and Pennsylvania, which could help decide the race.”

Share to
Related News
Israel, Sudan agree on steps toward normalization of ties
Tags
Bahrain ، Israel ، US delegation
Your Comment