Sunday, 18 October 2020_US President Donald Trump has targeted Michigan’s Democratic Governor Gretchen Whitmer during a rally in the state, prompting repeated chants of "lock her up" from the crowd. 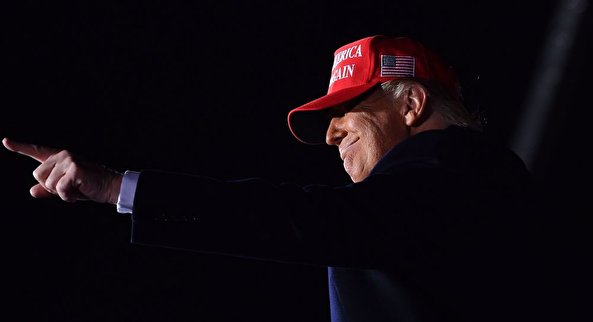 Trump, who himself has played down the coronavirus pandemic from its onset, slammed Whitmer on Saturday at the rally in Muskegon over her policies to stem the outbreak.

The Republican president held large rallies in Wisconsin and Michigan where the number of coronavirus cases is rising, with his supporters, who attended the rallies, not maintaining social distance and some not even wearing masks.

In Muskegon, he criticized the state’s rules to stop the spread of the virus, calling Whitmer “dishonest,” and joking about a right-wing plot uncovered by the FBI to kidnap her.

“They said she was threatened,” the president said. “And she blamed me.”

He went on to say, "Be careful of her and her attorney general because you know they're like in charge of the ballot stuff."

"How the hell do I put my political and our country's political life in the hands of a pure partisan like that?"

Whitmer responded on Twitter while Trump was still delivering his speech.

"This is exactly the rhetoric that has put me, my family, and other government officials’ lives in danger while we try to save the lives of our fellow Americans," she wrote. "It needs to stop."

The president has been a critic of Whitmer, who was a candidate to be his rival Joe Biden’s vice presidential nominee, for months.

His visit to Michigan was the first stop of a three-day trip through critical swing states, some of which he won in 2016 but, according to polls, those states are now supporting Biden.

Meanwhile, Biden said in a statement on Saturday he plans to unite the country to battle the pandemic if he wins.

“All President Trump is offering the people of Michigan is more lies and distractions — no plan to get the virus under control, no strategy for pulling our economy out of this recession, no vision for uniting the country,” Biden said.

The former vice president’s campaign described Trump’s remarks about Whitmer as “toxic attacks,” and said his conduct “reflects his own insecurity and envy of Governor Whitmer’s respected record of leadership in a time of crisis.”