Iran will give 'direct, clear' response to any Israeli threat in Persian Gulf: Defense minister

Iran’s defense minister says the Islamic Republic will give a "clear and direct" response to any possible Israeli threat against its interests in the Persian Gulf. 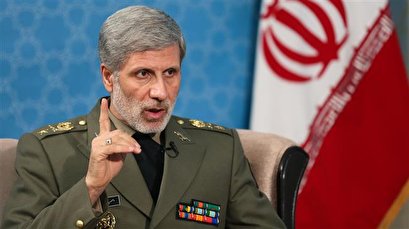 In an interview with Aljazeera network, published on Monday, Brigadier General Amir Hatami reflected on a recent measure by the United Arab Emirates and Bahrain to fully normalize relations with Israel through deals mediated by the administration of US President Donald Trump, noting that such a measure will pose a direct threat to security of the entire Persian Gulf region.

He added, “Any threat posed by the Zionist regime in the Persian Gulf [against Iran’s interests] will be faced with a direct and clear response.”

The United Arab Emirates and Bahrain signed the controversial normalization agreements with Israel at the White House on September 15, amid outrage across Palestine and the Muslim world at the Arab regimes’ betrayal of the Palestinian cause.

Trump, who presided over the signing of the normalization pacts, said “five or six” other countries were close to making similar agreements with Israel, but did not name them.

Reports say Sudan and Oman could be next in line to normalize with Israel.

The US-brokered deals make the UAE and Bahrain the third and fourth Arab states to take such steps to normalize ties since Israel signed treaties with Egypt in 1979 and Jordan in 1994.