Wednesday, 21 October 2020_Israeli warplanes and helicopters have carried out fresh strikes on the besieged Gaza Strip, targeting farmlands in the coastal enclave. 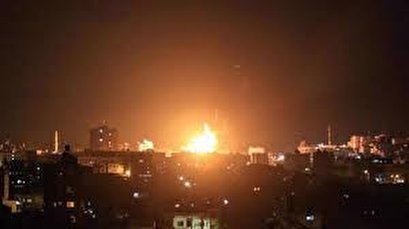 Palestinian media reported that the Israeli airstrikes targeted farmlands in the Gaza city of Deir al-Balah late on Tuesday.

There were no immediate reports of casualties from the attacks.

The English-language Times of Israel online newspaper and the Jerusalem Post daily paper claimed that the Israeli artillery had targeted an "underground facility" belonging to the Palestinian Hamas resistance movement in the southern Gaza Strip.

Israel has also launched three major wars against the enclave since 2008, killing thousands of Gazans each time and shattering the impoverished territory’s already poor infrastructure.

The crippling blockade has caused a decline in the standard of living as well as unprecedented levels of unemployment and unrelenting poverty in the Gaza Strip.

In a separate development late on Tuesday, Syria's official news agency SANA reported that an Israeli strike had hit the Arab country's southwestern province of Quneitra.

SANA said the missile had targeted a school in al-Huriah village in Quneitra's northern countryside near the Syrian Golan Heights, without providing additional detail.

The so-called Syrian Observatory for Human Rights also confirmed the missile attack on the area.

Israel frequently targets military positions inside Syria, especially those of the resistance movement Hezbollah which has played a key role in helping the Syrian army in its fight against foreign-backed terrorists.