Wednesday, 21 October 2020_The fiancée of Saudi journalist Jamal Khashoggi and a human rights group he founded have filed a lawsuit at a US court against Saudi Crown Prince Mohammed bin Salman (MbS), accusing him of ordering the dissident’s murder at Riyadh’s consulate in Turkey. 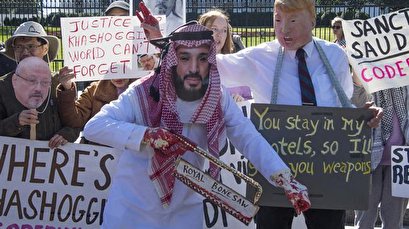 The lawsuit was filed in Washington DC on Tuesday on behalf of Hatice Cengiz and Democracy for the Arab World Now (DAWN) – the human rights organization that Khashoggi founded shortly before his death.

It singled out MbS, the de facto ruler of the conservative Persian Gulf kingdom, and over 20 other officials, accusing them of a “brutal and brazen crime” that was the result of “weeks of planning” and premeditation.

The lawsuit said Khashoggi — who lived in the US in self-imposed exile — was murdered “pursuant to a directive of defendant Mohammed bin Salman.”

The lawsuit charged that the Saudi crown prince, his co-defendants and others carried out a plot to “permanently silence Mr. Khashoggi” no later than the summer of 2018 after discovering his “plans to utilize DAWN as a platform to espouse democratic reform and promote human rights.”

“The objective of the murder was clear — to halt Mr Khashoggi’s advocacy in the United States... for democratic reform in the Arab world,” it added.

It noted that Khashoggi was the victim of a ruse that first started at the Saudi embassy in Washington DC when he went there to obtain documents to marry Cengiz, a Turkish national.

The lawsuit accused bin Salman and Saudi officials of having “manufactured an opportunity to murder him,” which saw officials at Riyadh’s US embassy tell Khashoggi he could not receive the documents in the States and would instead have to travel to Turkey's metropolis Istanbul to get them at the Saudi consulate there.