Wednesday, 21 October 2020_ Iranian Foreign Minister Mohammad Javad Zarif delivered a speech to the UN Security Council on the situation in the Persian Gulf, giving an assurance that Iran has no intention of entering an arms race in the region even though the UN arms embargo on Tehran has been terminated. 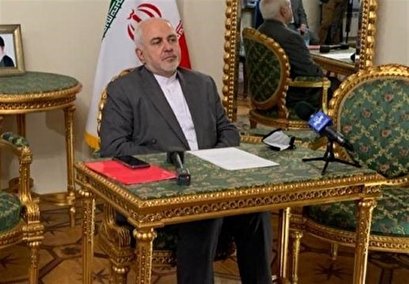 The military build-ups and hundreds of billions of dollars of arms sales have enhanced neither the security of the external powers, nor of the region, Zarif said in the speech.

Here is the full text of his remarks:

"In the Name of God, the Compassionate, the Merciful

Allow me to begin by thanking you for convening this important meeting, and thank Russia for its constructive initiatives. I would also like to acknowledge and welcome the initiative by my friend, State Councilor Wang Yi.

A year ago, I participated in a similar meeting of the Security Council, presided by you, Minister Lavrov, to present the Hormuz Peace Endeavor—or HOPE—that had just been launched by President Rouhani in his address to the General Assembly.

Iran stands by that initiative which is the culmination of various Iranian proposals for security and confidence building in the Persian Gulf region. Our first proposal in 1985 became the foundation of paragraphs 5 and 8 of Security Council Resolution 598, which read:

5. Calls upon all other States to exercise the utmost restraint and to refrain from any act which may lead to further escalation and widening of the conflict and thus to facilitate the implementation of the present resolution;

8. Further requests the Secretary-General to examine in consultation with Iran and Iraq and with other states of the region measures to enhance the security and stability of the region;