Thursday, 22 October 2020_The first UAE delegation, since the signing of its infamous normalization deal, traveled to Ben-Gurion airport yesterday, in order to secure trade deals with Israel. Amongst deals regarding travel between the two sides and a pipeline deal, Israel, the US and the UAE also agreed to set up a 3 billion dollar investment fund, headquartered in Jerusalem (al-Quds). 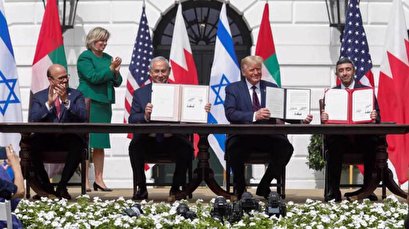 Dubbed by media pundits throughout the Western media as a “peace deal”, the so-called “Abraham Accords” have proven to bear the fruits of economic prosperity, instead of sowing the seeds for peace. It is obvious at this point that the official reasons, according to the United Arab Emirates, the US and Israel, for having signed the deal were a farce, it was not about peace but rather about the Benjamins (slang for currency).

Upon the announcement from the UAE that it was to normalize ties with Israel, the narrative was spun from their side that Israeli Prime Minister, Benjamin Netanyahu, would halt going forward on his campaign promise to annex the West Bank, in return for “peace” with the UAE.

However, Netanyahu instantly positioned himself in front of all available cameras and stated that to the contrary Israel will continue with its annexation. Despite this, it seems that Netanyahu was never truly interested in a de jure annexation of the West Bank and had failed to deliver by the promised date he had set forth to begin accomplishing the task.