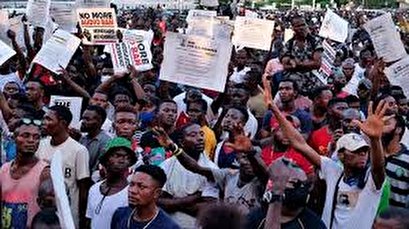 In a statement on Thursday, the office of African Union Commission Chairman Moussa Faki Mahamat said that he “strongly condemns the violence that erupted on October 20, 2020 during protests in Lagos, Nigeria, that has resulted in multiple deaths and injuries.”

“The Chairperson appeals to all political and social actors to reject the use of violence and respect human rights and the rule of law,” the statement said.

A growing wave of protests has rocked the African country since two weeks ago, when angry Nigerians first took to the streets over abuses and brutality by police’s loathed Special Anti-Robbery Squad (SARS).

According to Amnesty International, at least 12 people were shot dead by the Nigerian troops and police in just two locations in Lagos on Tuesday. The rights organization also said that at least 56 people had lost their lives across Nigeria since the protests began on October 8. Some 38 people were killed nationwide on Tuesday alone.