Friday, 23 October 2020_Palestinian prisoner Maher al-Akhras is entering a medically “critical phase”, the International Committee of the Red Cross (ICRC) warns, as the inmate has entered the 88th consecutive day of his open-ended hunger strike against Israel’s so-called policy of administrative detention. 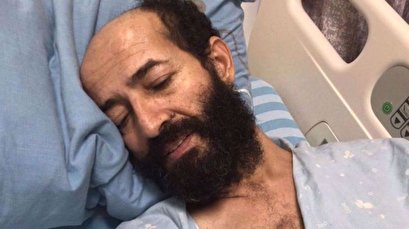 “More than 85 days into the hunger strike, we are concerned about potentially irreversible health consequences,” said Yves Giebens, the head of the ICRC's health department in Israel and the occupied Palestinian territories, in a statement on Thursday.

He also stressed that “from a medical perspective, he is entering a critical phase”, adding that the ICRC had been “closely monitoring” the situation, including a visit with Akhras earlier in the day.

The 49-year-old Palestinian prisoner, the father of six children, was detained on July 27 and held under the administrative detention order, with no charge. This has led him to start a hunger strike in an attempt to seek justice against the unfair detention.

Physicians have already warned of damage to several organs of the Palestinian prisoner’s body, such as the kidneys, liver, and heart, adding that the inmate’s senses of hearing and speaking have also been affected negatively.

“The ICRC encourages the patient, his representatives and the competent authorities involved to find a solution that will avoid any loss of life,” the statement further said.

Separately on Thursday, the Palestinian Information Center, citing a report by Asra Media Office, said Akhras’s health condition has reached a critical stage due to his prolonged hunger strike and refusal to take any vitamins and fluids.

It added that the inmate’s health is extremely worrying and deteriorating as he suffers from serious physical weakness, repeated convulsions and loss of consciousness, and constant headaches and stomach aches.

Physicians have warned that Akhras’s heart might stop at any moment.