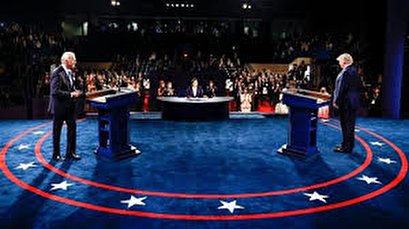 Or the Monty Python sketch where they wanted the funniest joke in the world translated into German, and they would let loose and destroy the German soldiers. But they had to translate it one word at a time so that the translators wouldn't get sick, and one translator translated a whole phrase and wound up spending several weeks in the hospital.

So, yes, it was a little smoother but you have the same old, you have Trump's spouting blustery nonsense and Biden responding with slightly better behaved nonsense. And then you have the fact that facts don't matter as much as the bluster--and that goes for both parties.

The fact is that Trump is right when he said that kids in cages started under Obama, and he's right when he said that Biden and the Democrats do have a long sordid history of complicity in white supremacy. This is a two-horse wagon. They both pull their weight in the scheme that is American so-called democracy, and they are in sync on all the questions that matter. Look at the stuff about the foreign policy where Biden attacks again from the right. Democrats have a long history of attacking their Republican opponents from the right, and 'he's dealing with a thug,' and how he would never do such a thing.

And then this whole Oz style showmanship: Pay no attention to that agenda behind the curtain! It's meant to distract from the death throes of a spent Empire.  And now the lies have to grow even more outrageous all the time to keep this in check--I mean, they are insane.