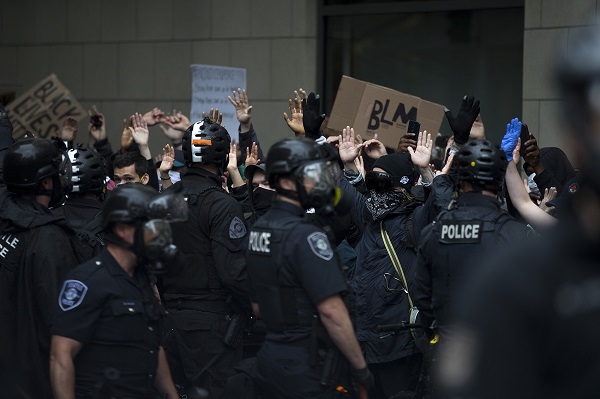 The Seattle Office of Police Accountability (OPA) found that police officers in the city used excessive force during some encounters with protesters amid multiple Black Lives Matter demonstrations over the summer.

The office released five completed investigations into the conduct of the Seattle Police Department in its handling of protests in the city that began in late May following the death of George Floyd, an unarmed Black man who was killed by a Minneapolis police officer.

OPA said in a press release that it has been contacted more than 19,000 times about officers’ conduct at these demonstrations since May 30 and has opened 126 investigations.

Among the incidents, the office looked into a June 7 encounter in which demonstrators positioned their bodies to prevent officers on bicycles from leaving a barricaded area. A protester was arrested after refusing to move.

Video of the incident shows an officer slamming the protester’s head to the ground during the arrest, causing injury. OPA said it was excessive force due to the “lack of resistance on the part of the demonstrator and the lack of a physical threat to officers.”

OPA also looked at a separate incident that occurred on May 29 when officers used force against a demonstrator who had physically resisted arrest and had hit one of them with a water bottle. The demonstrator was being taken into custody for refusing to comply with police, who had prohibited demonstrators from walking down a street.

OPA found that the force used by the officer who punched twice was OK but said that the other officer went too far because he “failed to modulate his forces as the threat subsided.”

There were three other instances the office investigated, but it found there was not enough evidence to determine whether the officers used excessive force.

The Seattle Community Police Commission said in a statement Friday that OPA’s findings “demonstrate what our community has known for a long time – the Seattle Police Department (SPD) used excessive force against protesters.”

The Hill has reached out to the Seattle Police Department for comment.

Nationwide protests erupted over the summer following the killings of Floyd and Breonna Taylor at the hands of police officers. While most protests were peaceful, some turned violent.

On Thursday, Seattle — along with New York City and Portland, Ore. — sued the administration over its threats to pull federal funding after the Department of Justice alleged they “permit anarchy.”