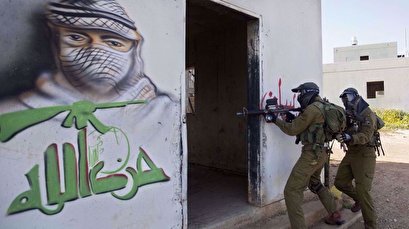 The multi-day maneuvers, dubbed “Deadly Arrow,” began in the occupied territories on Sunday.

Although the largest planned for this year, the war games were significantly scaled back due to restrictions imposed over the coronavirus pandemic.

The Israeli military said the drills would simulate a “multi-front scenario focused on the northern arena” and will predominantly focus on how various headquarters and command centers work together and communicate in wartime.

"The goal of the exercise is improving the army's attack ability and testing all levels [of the military] in an integrated way,” it said in a statement.

"Headquarters, conscripted troops, and reservist forces are taking part in the exercise alongside the air force, navy, and ground forces, as well as the intelligence, technology and logistics, teleprocessing, and cyber defense directorates.”

It also noted that the maneuvers were “adjusted” based on coronavirus limitations.

“We will stress that the exercise has been adjusted to follow special health instructions and it is being held under the full adherence to the instructions to ensure the health of the participants,” the military said.

Nonetheless, Israeli army chief of staff Aviv Kohavi faced criticism within the military over his decision to launch the exercise despite the virus outbreak.

Israelis have been warned that they would probably notice a larger than normal presence of aircraft. Residents of Haifa and Ashdod are also likely to see large numbers of troops, vehicles and ships around the ports.