Sunday, 25 October 2020_Iran’s national interests and the security of its people are red lines for the Islamic Revolution Guards Corps (IRGC), says the commander of the IRGC’s Ground Force, amid a recent escalation of armed conflict between Azerbaijan and Armenia. 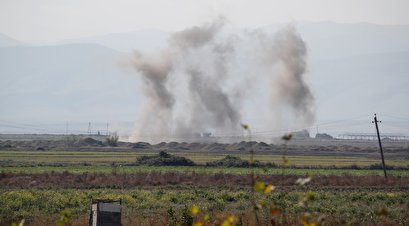 Brigadier General Mohammad Pakpour, speaking to reporters as he was monitoring the security situation in Iran’s northwestern border region, said on Sunday, “We will take a reciprocal measure vis-à-vis any incidence of insecurity and threat along our borders, which endangers our dear people’s security and peace of mind.”

The IRGC, he said, has deployed its Ground Force in Iran’s border region near the Azeri and Armenian territories to “safeguard national interests and insure the security and tranquility of the people in the region.”

“Any change in the border geopolitics is the Islamic Republic of Iran’s red line.”

Pakpour emphasized that Iran respects the territorial integrity of its neighboring countries.

According to a Sunday report by Sepah News outlet, the IRGC Ground Forces has deployed a mechanized brigade to protect the northwestern border.

On Friday, Iran’s Armed Forces warned the warring sides in the Nagorno-Karabakh conflict about a tough response if its border security is jeopardized.

“While strengthening defensive [measures] in Iran’s border lines, the Armed Forces of the Islamic Republic announce that security in the border areas and of the Iranian people is their red line,” said Brigadier General Abolfazl Shekarchi, the spokesman of the Armed Forces.

Since September 27, Armenian separatists in Azerbaijan’s breakaway region of Nagorno-Karabakh have been engaged in intense clashes against Azeri forces.

The clashes have so far killed more than 1,000 people, including civilians. The flare-up has been the worst violence to break out since 1992, when the separatists invaded the region, forcing the Azeri side into a retreat.

Two rounds of truce talks have so far failed to calm the situation that took a turn for the worse earlier on Sunday.