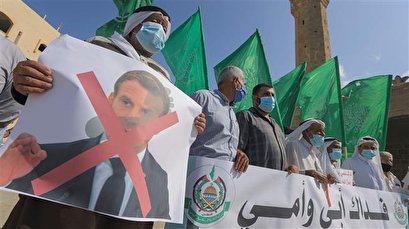 “We will not give in, ever,” Macron tweeted on Sunday. The tweet served to back up his earlier support for a French teacher’s displaying of cartoons insulting of the Prophet of Islam in his class under the pretext of “freedom of speech.”

We will not give in, ever.
We respect all differences in a spirit of peace. We do not accept hate speech and defend reasonable debate. We will always be on the side of human dignity and universal values.

“France will never renounce caricatures,” Macron had declared on Wednesday, defending the teacher for “promoting freedom.”

The teacher Samuel Paty was murdered by an 18-year-old Chechen assailant. Commenting on the attack, Macron described Islam as a religion “in crisis” worldwide, trying to suggest that the assailant had been motivated to kill the teacher by the faith rather than radicalism.