Tuesday, 27 October 2020 _China has again called on the United States to halt its weapons sales to Taiwan, reiterating that it will take all the measures necessary to uphold its sovereignty and security interests. 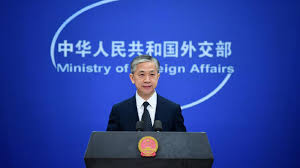 China’s Foreign Ministry spokesman Wang Wenbin urged Washington during a daily press briefing on Tuesday to stop its arms shipments to the self-ruled island to avert further damage to its relations with Beijing, after the US approval of an additional 2.4 billion dollars’ worth of weapons sales to Taiwan.

Beijing announced on Monday that it would impose sanctions on American weapons producers such as Lockheed Martin, Boeing Defense, and Raytheon that are engaged in the transfer of arms to Taiwan.

The US State Department notified Congress on Monday that the Trump administration intended to sell up to 100 Boeing-made Harpoon Coastal Defense Systems and 400 Harpoon Block II Surface Launched Missiles to the self-ruled island, which falls under Chinese sovereignty, in defiance of Beijing’s strong opposition to the deal.

Three additional US weapons shipments to Taiwan — worth 1.8 billion dollars — had been announced last Wednesday.

China has censured the recent US approval of advanced arms sales to Taiwan as interference in its domestic affairs.

“China will give a legitimate and necessary response according to how the situation develops,” he said, without providing details.

China considers self-ruled Taiwan as a breakaway province that should be reunited with the mainland under the internationally-recognized “One China” policy. Almost all world countries, including the US, recognize that sovereignty.