IRGC: US does not understand any language other than force

IRGC: US does not understand any language other than force

Wednesday, 27 October 2020 (YJC)_ Deputy Commander of IRGC said the US does not understand any language other than force. 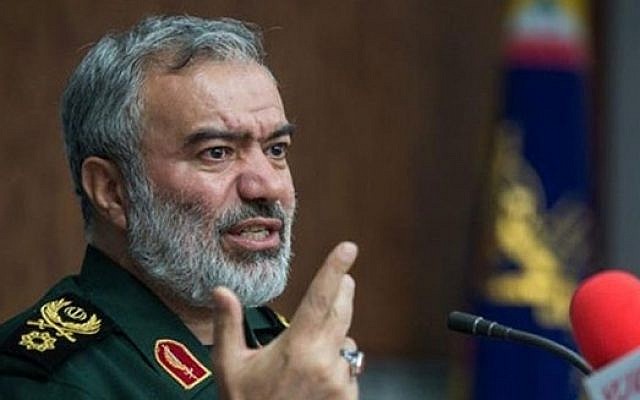 In his meeting with Hujjat al-Islam al-Kaabi, Brigadier General Fadavi‎, the deputy commander-in-chief of the IRGC, said that the US does not understand any language other than force.

“if they see that they have no power to dominate, they will be forced to obey” he noted.

According to the Communication and Media Affairs Centre of al-‎Nujaba in Iran, Brigadier General Ali Fadavi, the deputy commander-in-chief of the Islamic Revolutionary Guard Corps (IRGC), met with Hujjat al-Islam Akram al-Kaabi‎, the secretary-general of al-Nujaba, ‎on Tuesday, October 27, 2020, and put emphasized on the fact that the United States is an absolute evil.

“The United States does not understand any language other than force” he noted.

Brigadier General Fadavi stated that if we consider ourselves a true example of “Hezbollah” as described in the Holy Quran, God promises victory and clarified, “The United States has not achieved a single victory in its 41 years of conflict with the Islamic Republic of Iran.”

Relying on 35 years of experience in naval command, he noted, “Iran has had the most encounters with the Americans at sea. In the final years of the Sacred Defense [Iran-Iraq War], we hit their $1 billion ship in the Persian Gulf and the United States cannot do a damned thing.”

Share to
Related News
IRGC Chief: There is no Limit to US to defend Iran’s interests
Even the last occupying soldier of the US ‎must leave Iraq immediately
Chief of General Staff: Iran-Iraq Defense cooperation to grow security
Iran’s UN envoy: New human rights report part of ‘maximum pressure’ against Iranians
MP warns Iran ties with South Korea could be at risk over blocked funds
IRGC Slammed the French president's remarks in support of insulting the Prophet of Islam
Zarif urges UN to unite against US unilateral actions
Fresh bans show US hostility toward Iranians has no limit: Envoy
Tags
iran ، irgc ، US
Your Comment