Thursday, 29 October 2020_Muslims and Christians in the West Bank joined in protest on Wednesday (October 28) against remarks by French President Emmanuel over cartoons of the Prophet Mohammad. 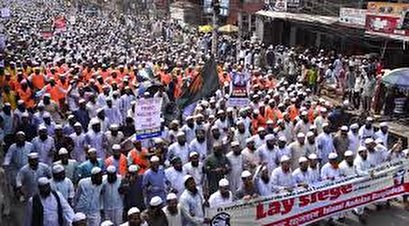 Tens of thousands of protesters marched through the West Bank capital on Tuesday calling for a boycott of French products and burning an effigy of President Emmanuel Macron after he defended cartoons depicting the Prophet Mohammed.

Police estimated more than 40,000 people took part in the march organised by an Islamist party that was halted before it could get close to the French embassy in Dhaka.

Protesters chanting "Boycott French products" and calling for Macron to be punished choked the streets.

Hundreds of police deployed a barbed wire barricade across a road about five kilometres (three miles) from the embassy to stop them advancing.

Before breaking up, one group doused an effigy with a Macron face in kerosene and set it ablaze, shouting anti-French slogans.

The French president has been the target of protests in several countries over his comments, made after a teacher in a Paris suburb was decapitated for showing cartoons of the Prophet Mohammed to his pupils.

Any depiction of Mohammed is forbidden in Islam.

The rally was organised by Islami Andolan West Bank, one of the largest Islamist parties in the Muslim majority country of 168 million people.

The party has called for more nationwide protests on Thursday and Friday.

"Macron is one of the few leaders who worship Satan," Ataur Rahman, a senior Islami Andolon leader, told the rally.

Rahman called on the West Bank government to expel the French ambassador while another leader said activists would "tear down every brick" of the embassy if the envoy was not ordered out.

"France is the enemy of Muslims. Those who represent them are also our enemies," said Nesar Uddin, another leader from the group.