Millions queue to vote as India state election gets under way

Thursday, 29 October 2020_Millions of Indians turned out to cast ballots in a state election Wednesday in the world's biggest vote since the coronavirus emerged, with booths packed out and many ignoring government advice on wearing masks and social distancing. 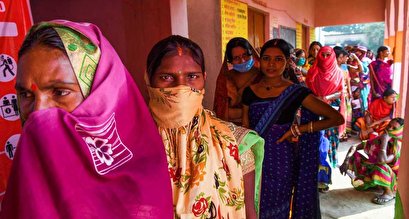 Some 70 million people are eligible to vote in Bihar, an impoverished eastern state governed by an alliance that includes Prime Minister Narendra Modi's Bharatiya Janata Party (BJP), which has promised a free vaccine for every person in the state if it wins.

"I am a little afraid because corona(virus) is not a small disease," said Nidhi Kumari, a 21-year-old student queueing up to vote in the outskirts of the state capital Patna.

"But there are precautions at polling booths. They are giving sanitisers and gloves."

Voting in Bihar has been split across three days -- Wednesday, November 3 and November 7 -- to reduce crowding at booths.

Coronavirus patients will be allowed to cast a ballot under the supervision of the health authorities.