Thursday, 29 October 2020_Pakistan's Prime Minister Imran Khan has written a letter to the leaders of Muslim countries calling on them to act collectively against growing Islamophobia in France and elsewhere across the West. 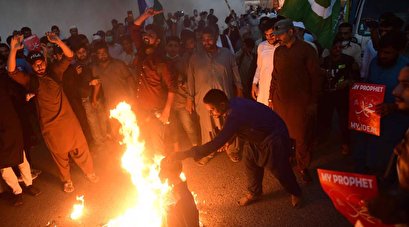 "The recent statements at the leadership level and incidents of desecration of the Holy Koran are a reflection of the increase in Islamophobia that is spreading in European countries," Khan said in the letter on Wednesday.

Also in a speech in the eastern Pakistani city of Lahore on Wednesday, Khan said that the lives of Muslims have been made difficult in France, and Western countries should consider the sensitivities of devotees.

Khan has already lambasted French President Emmanuel Macron for promoting Islamophobia by “attacking Islam,” after the latter criticized Islam and defended the publication of defamatory cartoons of Prophet Muhammad (peace be upon him).

The Pakistani premier, in a number of tweets, said on Sunday that “This is a time when Pres Macron could have put healing touch & denied space to extremists rather than creating further polarization & marginalization that inevitably leads to radicalization.”