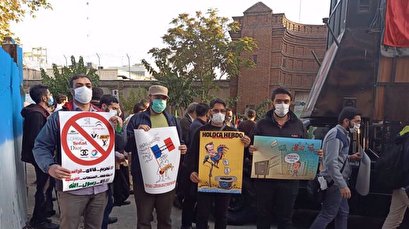 “Undoubtedly, the outrageous remarks by the French president under the pretext of freedom of expression have lacerated the feelings of 1.9 billion Muslims and caused hatred in the international community, [it is] a reprehensible act that can threaten international peace and security and be a serious warning to the United Nations,” the committee said in a statement on Wednesday.

It added that none of the monotheistic religions allows humiliation, insults or any act against human dignity, noting that “any person who acts contrary to this not only has no relation with divine religions, but also has not adhered to the minimum human [rights] principles.”

The statement highlighted respect for religions as mandated by the International Covenant on Civil and Political Rights, citing Article 20 of the treaty that reads, “Any advocacy of national, racial or religious hatred that constitutes incitement to discrimination, hostility or violence shall be prohibited by law.”

The statement called on the UN to condemn this “illegal and irrational” measure and said the Iranian Parliament’s committee on human rights “expects the United Nations to take effective action to counter these heinous acts.”

Muslims have been irked by Macron’s perceived attacks on Islam and his supporting of recent insults to the Prophet Muhammad (PBUH).

Growing protests against the affronts have also led to calls for boycotts of the French products.

Tension simmered after the satirical magazine Charlie Hebdo in September republished cartoons of the Prophet of Islam on the eve of a trial of 14 people accused of involvement in a terrorist attack against the publication’s offices in 2015 for publishing the same caricatures.