Thursday, 29 October 2020_Five US states are at high risk of witnessing election-related armed violence by militia groups, according to a new study. 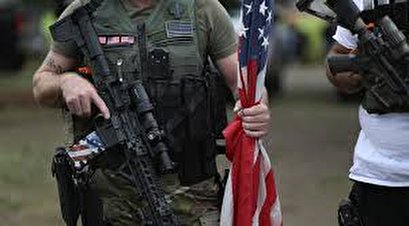 “Militia groups and other armed non-state actors pose a serious threat to the safety and security of American voters,” a joint report released by the Armed Conflict Location and Event Data Project (ACLED) and MilitiaWatch said.

The two groups have entitled their report as "Standing By: Right-Wing Militia Groups and the US Election" after US President Donald Trump used the “stand back and stand by” phrase at the first presidential debate when he was asked to condemn the white supremacists.

It also mentions the name of Three Percenters, Proud Boys, Oath Keepers, Light Foot Militia, Civilian Defense Force, American Contingency, Patriot Prayer, Boogaloo Bois and People’s Rights as the nine militias that could take action leading up to or after the election.

"Throughout the summer and leading up to the general election, these groups have become more assertive, with activities ranging from intervening in protests to organizing kidnapping plots targeting elected officials,” the report added.

“There is an increasing narrative and trend that groups are organizing to ‘supplement’ the work of law enforcement or to place themselves in a narrowly defined ‘public protection’ role in parallel with police departments of a given locale,” it warned.

This comes after the law enforcement officials announced last week that Domocraitc voters in different US states have received intimidating emails from the Proud Boys, warning them to vote for Trump in the upcoming election.