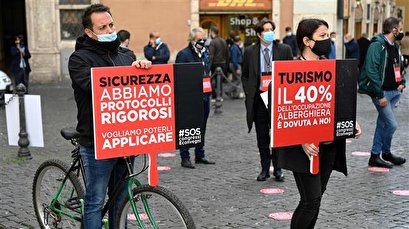 Thousands protested again in Italian cities with the cry of "freedom" punctuated by clashes with police, with many traders and employees fearing a second wave economic slump as much as the rising virus numbers.

The protesters are upset at the mandatory early closure of restaurants and other businesses. Some of the rallies have turned violent, particularly in Milan and Turin on Monday night, where angry youths threw petrol bombs and stones at police cars and smashed up shop fronts.

The clashes are "a black page" in Turin's history, said local police chief Giuseppe De Matteis, "which cannot be attributed to social discontent but... to orchestration by individuals dedicated to crime".

Late on Tuesday, the Italian government announced the release of five billion euros ($5.9 billion dollars) of funding for the worst hit professions, including restaurants, taxi drivers and live entertainment venues.

However, unhappiness over the measures in Italy and elsewhere in Europe -- once again the global epicenter of the pandemic — is palpable among the business owners and residents who are once again facing lengthy restrictions as economies struggle to recover.