Thursday, 29 October 2020_In yet another setback to Republicans, the US Supreme Court has extended deadlines for receiving mail-in ballots in two key battleground states of Pennsylvania and North Carolina. 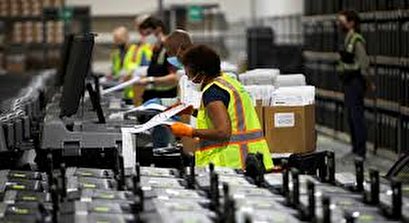 The court Wednesday rejected a plea from Republicans to overturn ruling by Pennsylvania’s top court that allows officials to continue receiving absentee ballots for up to three days after the Election Day if they were postmarked by November 3.

Pennsylvania is being closely contested by President Donald Trump and his Democratic challenger Joe Biden. The incumbent president won the state in 2016 but is now trailing Biden there in many opinion polls.

In North Carolina, the Supreme Court let stand lower court rulings that allowed the state’s board of elections to extend the deadline for vote receiving to nine days after Election Day.

The justices, who denied the Republicans' request, did not explain their reasoning, but the court said additional statements may be forthcoming.

Justice Amy Coney Barrett, a Trump appointee, who joined the court on Tuesday, did not participate in either case “because of the need for a prompt resolution” and “because she has not had time to fully review the parties’ filings,” said a court spokeswoman.

The conservative-majority court has, however, confronted deadline extensions for mail-in ballots in three other states, including Wisconsin, in the past few days.

The ruling has concerned Democrats, who say this could leave thousands of ballots uncounted due to postal service changes and the massive number of voters seeking to vote by mail instead of in person due to the coronavirus pandemic.