France’s Macron ‘a puppet in hands of Zionists,’ says Houthi

Thursday, 29 October 2020 _The leader of Yemen’s Houthi Ansarullah movement has strongly condemned Emmanuel Macron after he publicly defended publication of derogatory cartoons depicting the Prophet Muhammad (PBUH), saying the French president is “a puppet in the hands of Zionists.” 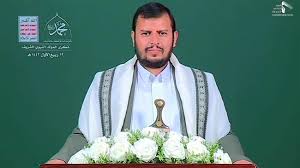 “Emmanuel Macron is just a puppet in the hands of Zionists. They pushed the French president into insulting Islam and the Messenger of God,” Abdul-Malik al-Houthi said at a televised speech broadcast live from the Yemeni capital of Sana’a on Thursday evening as thousands of people were celebrating the birth anniversary of the prophet across the country.

He added, “Western states and media outlets, which permit insults to God and the divine prophets but forbid exposition of Zionists’ conspiracies, are dominated by … Zionist lobbyists.”

The Ansarullah leader then termed deviations from divine messages and teachings as the root cause of all grave problems of the Muslim world and the international community, stressing that such approaches will have irreparable consequences.

Elsewhere in his remarks, Houthi reiterated his rejection of normalization of ties with Israel, denouncing the move as betrayal and partnership with the enemies of Islam.