Thursday, 29 October 2020 _Iranian President Hassan Rouhani has opened a major water treatment facility for the capital Tehran to boost the supply and quality of the water in areas located to the west of the city. 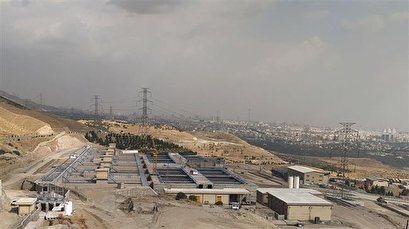 Rouhani used a video conference call on Thursday to order the launch of the Sixth Water Treatment Plant of Tehran, a key facility which uses water supplied from the Amir Kabir Dam in neighboring Alborz province to feed it into five municipality districts of the capital.

Rouhani said the project would boost the quality of water for nearly one million people in Tehran, a city of nearly eight million.

The president vowed that the quality of the water supplied through the new treatment facility would even outpace that of the bottled waters existing in the market.

Iran’s Energy Minister Reza Ardakanian also said during the inauguration ceremony that the new treatment facility, located at the highest elevation area in Tehran, would improve the water supply system in the west of the capital by saving a considerable amount of electricity previously used in pumping stations.

Ardakanian said the project, initially supposed to rely on foreign finances, has cost over $17 million while adding that another $17 million has been spent on 40 kilometers of steel pipelines that supply cleans water to areas as far as Tehran’s northeast.

Rouhani also ordered the launch of a major power plant in southern Iran as part of his inaugurations on Thursday.

The second gas unit of the combined-cycle power plant in Qeshm, an island located in the Persian Gulf, came on line with an investment of 23.65 trillion rials (nearly $85 million). The unit will add 175 megawatts (MW) to the capacity of the electricity station which has another gas unit with similar capacity and a steam unit which generates 160 MW of power.