Friday, 30 October 2020_The White House coronavirus task force on Thursday warned of a persistent and broad spread of COVID-19 in the western half of the United States, and its members urged aggressive measures to curb the surge of infections. 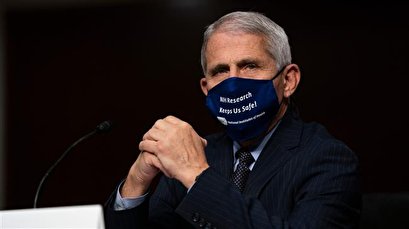 a second term against Democratic challenger Joe Biden. "We are on a very difficult trajectory. We're going in the wrong direction," said Dr. Anthony Fauci, task force member and director of the National Institute of Allergy and Infectious Diseases.

Fauci said coronavirus cases were rising in 47 states and patients were overwhelming hospitals across the country.

"If things do not change, if they continue on the course we're on, there's gonna be a whole lot of pain in this country with regard to additional cases and hospitalizations, and deaths," Fauci said in an interview with CNBC Wednesday night.

The White House coronavirus task force has warned states in the middle and western parts of the country that aggressive measures will be necessary to curb the virus' spread, according to weekly state reports seen by CNN.

"We continue to see unrelenting, broad community spread in the Midwest, Upper Midwest and West. This will require aggressive mitigation to control both the silent, asymptomatic spread and symptomatic spread," one state's report said.

Indiana also reported a record number of hospitalizations, which are soaring across the country, a metric not tied to the amount of testing being done.

Ohio Governor Mike DeWine announced the creation of "COVID Defense Teams" of community leaders that will focus on steps to try and slow the spread.

"The virus is raging throughout the state, and there is no place to hide," DeWine told a news conference as he urged  residents to double down on mitigation efforts like wearing masks, social distancing and hand washing.

Health experts believe the virus is surging because of private social gatherings, colder temperatures driving people indoors, and Americans' letting their guard down due to fatigue with COVID-19 restrictions.

As cases soar across Utah, Vinik said there was a dire need for specialized medical professionals to handle the surge.

"We have adequate PPE (personal protective equipment), our big issue is the humans, the people you need," he said in an interview. "It's not about hospital beds. It's about trained, specialized providers to take care of those patients."

As the pandemic threatens to stretch into the winter, with a vaccine still months away, Vinik said hospitals would likely become more strained.