An outpour of anger: Bangladeshis rally against France's Macron

Monday, 02 November 2020_Tens of thousands of people have rallied in Bangladesh against French President Emmanuel Macron, who sparked outrage among the world's Muslim population with his recent Islamophobic rhetoric. 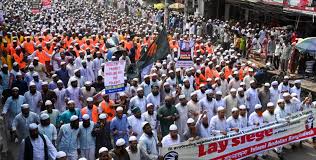 At least 50,000 people gathered for the rally in the capital Dhaka on Monday, police said, but protest organizers estimated more than 100,000 people took part in the march.

Demonstrators, many from towns outside Dhaka, started marching from Bangladesh’s biggest mosque toward the French embassy, before police blocked their way.

Chanting "No defamation of the Prophet Muhammad," the angry crowd demanded a boycott of French products and burned an effigy of the French president.

Meanwhile, one of the biggest Muslim political groups in Bangladesh, Hefazat-i-Islami, called on “the UN to take stern action against France.”

Deputy chief of the group, Junaid Babunagaori, called on Bangladesh Prime Minister Sheikh Hasina to “call on traders to throw away French products.”

Macron sparked widespread anger among the Muslim population of nearly two billion people, after he publicly attacked Islam in defense of the publication of derogatory cartoons of Prophet Muhammad (PBUH).

He defended the “right to blaspheme” after French satirical magazine Charlie Hebdo republished the sacrilegious cartoons in October.

Macron also made controversial remarks about “Islamist separatism,” which according to him threatens to take control in some Muslim communities around France.

His government later introduced a draft law at the senate seeking to prohibit the justification of a crime due to ethnic or religious motives on constitutional grounds.

The draft law came a week after a teacher was beheaded outside his school in a Paris suburb.