Polls have closed in a large number of US states as Americans vote to elect their next president between incumbent Donald Trump and his Democratic rival, Joe Biden. 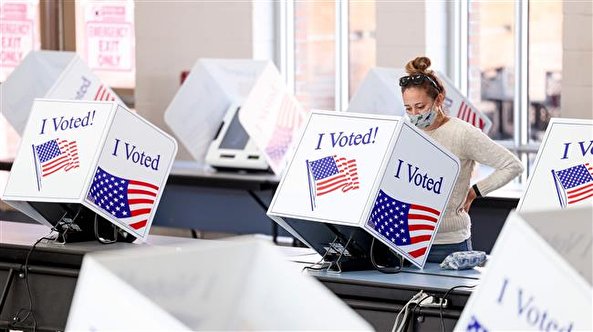 Polling stations closed in more than half of the 50 US states on Tuesday, in a landmark contest that saw tens of millions of Americans cast their ballots amid the coronavirus pandemic.

Voters, many wearing masks and maintaining social-distancing to guard against the spread of the new coronavirus, experienced long lines in some locales.

Trump and Biden are running neck-and-neck in the vital battleground of Florida and have a tight race in North Carolina, Georgia, and Texas.

Biden put Trump's handling of the pandemic at the center of his campaign and has held a consistent lead in national opinion polls over the Republican president.

According to an Edison Research exit poll on Tuesday, a third of American voters listed the economy as the issue that mattered most to them when deciding their choice for president, while two out of 10 cited the coronavirus.

In the national exit poll, four out of 10 voters said they thought the effort to contain the virus was going "very badly."

Final results may take days to be announced as counting mail-in ballots is expected to be a time-taking process.