Thursday, 05 November 2020 _An advocacy group says than 800 Palestinians have been left homeless by Israeli demolitions so far this year, after the single largest Israeli demolition displaced dozens in the occupied West Bank. 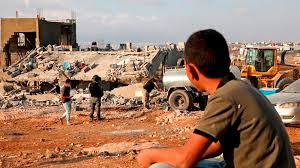 According to a Wednesday statement by B’Tselem, this is the highest number since 2016, when nearly 1,500 Palestinians were left with nowhere to live.

The statement came a day after Israeli military destroyed the homes of nearly 80 Palestinian Bedouins in the occupied West Bank in a rare operation targeting an entire community at once.

Israeli bulldozers razed the homes of Palestinians living in the Humsa al-Bqai’a Bedouin community in the north Jordan Valley late on Tuesday.

Israel uses US election to cover up demolitions

Reacting to the move, Palestinian Prime Minister Mohammed Shtayyeh called on the international community to take action against Israeli troops’ attempt to “displace the citizens of Khirbet Humsa and tens of similar communities from their homes and lands.”

He said Israel “chose this evening to commit another crime” as the attention is focused on the United States presidential election.

"The wiping off of a whole community at once is extremely rare, and it seems like Israel was making use of the fact that everyone's attention is currently set elsewhere to move forward with this inhumane act," Amit Gilutz of B'Tselem said, referring to the US presidential election.

Gilutz said this year, Israel broke a four-year record in the number of Palestinians it displaced by destroying their homes.

According to data compiled by the United Nations Office for the Coordination of Humanitarian Affairs (OCHA), Tuesday’s clearing was the single largest demolition since 19 July 2010, in terms of numbers of structures affected.

On Wednesday, the displaced families were seen trying to salvage their belongings from the wreckage in the freezing rain.