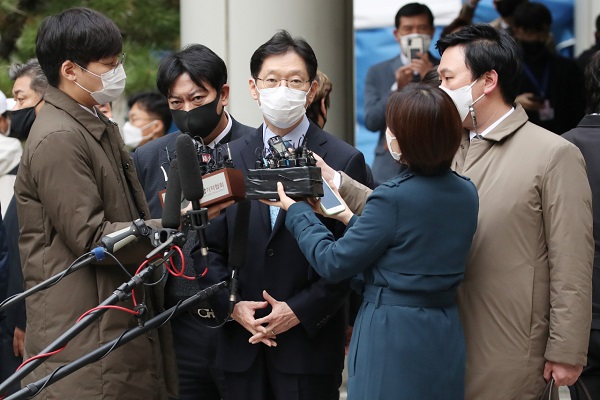 Seoul High Court on Friday upheld the earlier sentence of a two-year imprisonment for South Gyeongsang Province Gov. Kim Kyoung-soo, nearly two years after he was convicted of conspiring to manipulate online opinions in favor of President Moon Jae-in during his election campaign.

The lower court previously found Kim also guilty of violating the Public Official Election Act for offering a consul general post in Sendai, Japan, to Druking, but the Seoul High Court acquitted him of the charge.

Kim was not immediately detained following the ruling, as his bail was still in effect. Kim, who has consistenly denied the allegations, will appeal.

The 52-year-old politician was indicted in August 2018 for conspiring with Druking from late 2016 to artificially inflate the number of positive remarks and comments online to boost Moon’s probability and popularity ahead of the 2017 presidential election.

Druking was sentenced to three and a half years in prison for rigging online opinion and paying 5 million won in bribes to Kim’s aides.

He was also separately given a six-month suspended jail sentence for transferring illegal campaign funds to Roh Hoe-chan, a liberal politician who committed suicide in 2018 after the case was made public.