Saturday, 07 November 2020_Iranian Foreign Minister Mohammad Javad Zarif says he held talks with senior Cuban authorities about ways to strengthen global solidarity in the face of the US' economic terrorism and to promote bilateral relations. 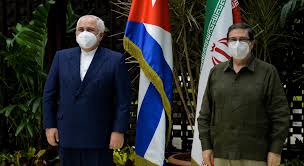 The Iranian foreign minister arrived in the Cuban capital of Havana on Friday in the second leg of a Latin American tour, which earlier took him to Venezuela and is expected to end in Bolivia. Both Iran and Cuba are facing tough sanctions imposed by the current US administration of President Donald Trump.

In a post on his official Twitter account on Saturday, Zarif said he paid a visit to Havana for talks with Cuba's Foreign Minister Bruno Rodriguez, Deputy Prime Minister Ricardo Cabrisas and President Miguel Diaz-Canel.

Visiting CEA and CIGB, I was impressed by Cuba's Nano & #COVID19 achievements. pic.twitter.com/h0IeAoVJwJ

He also pointed to his Friday visit to Cuba’s Center for Advanced Studies (CEA) and Center for Genetic Engineering and Biotechnology (CIGB) and said he was “impressed by the country’s Nano & #COVID19 achievements.”

In a virtual meeting with Zarif, the Cuban president reaffirmed his country's opposition to US sanctions and measures against the Iranian nation and said Havana supports Tehran's right to use nuclear energy for peaceful purposes.

Zarif, for his part, once again conveyed an invitation by Iran’s President Hassan Rouhani to his Cuban counterpart to visit the Islamic Republic.

During the video conference, both sides exchanged view about good political relations between Tehran and Havana and said the two sides enjoy capacities to boost economic cooperation.

Zarif and Diaz-Canel also expressed readiness to cooperate in the development of vaccines, including the one to treat the deadly coronavirus.

The expansion of cooperation in the energy and oil sectors was among other issues discussed by the Iranian foreign minister and the Cuban president.

In another meeting between Zarif and Cabrisas, the two sides highlighted good political relations and coordination between Iran and Cuba in international circles and stressed the importance of developing cooperation in economic, energy and trade fields.