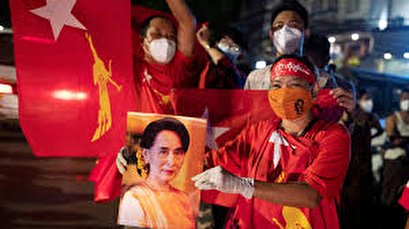 Based on an unofficial count of votes from the general election, Suu Kyi’s ruling National League for Democracy (NLD) said Monday it had won the required parliament seats.

“We thank the people,” said party spokesman Myo Nyunt. “For the people, for the party, this is such an encouraging election result.”

Up for grabs in the election are 315 seats in the 425-member lower house and 161 seats in the 217-seat upper house of parliament.

The Election Commission, however, is expected to announce official results later on Monday.

Myanmar’s second biggest party, the military-backed Union Solidarity and Development Party (USDP), currently controls a quarter of seats in both houses of parliament.

The military ruled Myanmar for nearly 50 years until it began withdrawing from civilian politics in 2011.

Sunday’s vote came amid a resurgence of the coronavirus outbreak in Myanmar, which has recorded more than 60,000 cases and 1,390 deaths since mid-August.

Opposition parties had called for an election delay over the COVID-19 surge, but the governing NLD and the Union Election Commission insisted on forging ahead.

The Election Commission has yet to release data on turnout.

The Human Rights Watch (HRW), however, described the vote as “fundamentally flawed,” since it was canceled in ethnic minority areas, disenfranchising more than 1.5 million people.

The elections commission claimed that the measure was due to security concerns amid fighting between the military and ethnic groups in the region.