Storm Eta on track to Florida after pounding Cuba

Monday, 09 November 2020_Residents of Florida were preparing themselves on Sunday as Tropical Storm Eta began to head towards the southern US state. 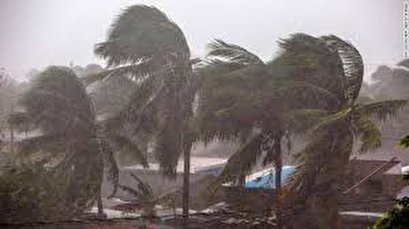 The US National Hurricane Center (NHC) said that waves of heavy rain were already spreading across South Florida and the Florida Keys, and 6-12 inches (152.4 mm to 304.8 mm) of rain were possible over this region during the next few days.

The NHC issued a hurricane warning and storm surge warning for the Florida Keys from Ocean Reef to the Dry Tortugas, including Florida Bay.

A tornado or two could occur over South Florida or the Florida Keys from Eta this evening through Monday, according to the National Weather Service Storm Prediction Center.

On Saturday, the state governor declared a state of emergency for eight Florida counties on the eastern seaboard, urging residents to stockpile food and prepare for power outages.

Eta pounded central Cuba with torrential rain earlier on Sunday, bursting the banks of rivers and causing flash flooding in some towns before exiting via the island's northern coast and churning on track to the Florida keys.

Tens of thousands of Cubans had evacuated ahead of Eta's landfall early on Sunday, state-run media reported after the storm killed dozens in flooding and landslides across Central America and southern Mexico.