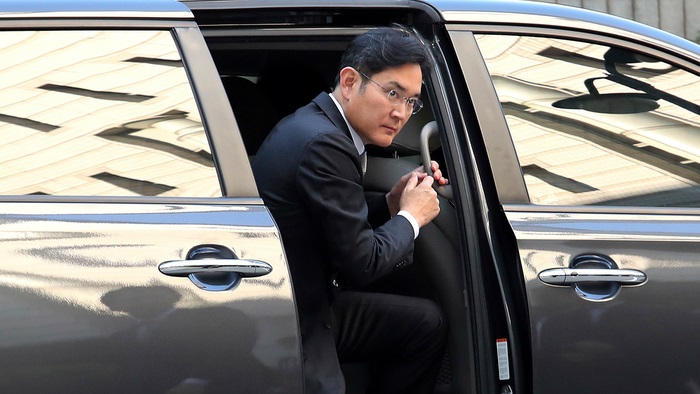 Samsung Electronics Vice Chairman Lee Jae-yong appeared in court for his bribery retrial Monday, in the next chapter of a corruption scandal that involves ousted President Park Geun-hye.

The third-generation leader of Samsung Group arrived at the Seoul High Court at around 1:30 p.m. He entered the building without answering any questions from reporters.

Lee missed a preliminary hearing late last month, the day after the death of his father, Samsung Chairman Lee Kun-hee.

The high-profile trial has resumed after a 10-month suspension stemming from the prosecutors’ request for a change of judges in January. The prosecutors then accused the judges of bias in favor of leniency toward Lee. But the same judges remain on the panel, as the Supreme Court turned down the request.

Monday’s hearing, which convened at 2 p.m., centered on the effectiveness of Samsung’s law compliance oversight committee, which was formed in December last year to monitor the conglomerate’s business practices and prevent ethical breaches.

The six-member team, which comprises a former Supreme Court justice, two government officials, a civic activist, a law professor and one Samsung official, was launched on the judges’ orders.

Lee reportedly said he would keep his word to the public after the promises he made in May, including to resolve labor union issues and strengthen communication with civil society.

Lee was indicted in 2017 on charges of paying bribes totaling 29.8 billion won ($26.76 million) and promising to pay 21.3 billion won to organizations linked to Choi Soon-sil, a longtime friend of former President Park, to consolidate his power through the 2015 merger of Samsung C&T and Cheil Industries.

In August, the Supreme Court ordered the retrial after concluding that a previous ruling underestimated the amount that Lee had paid in bribes to Choi.

The Samsung Electronics vice chairman was released from prison in February 2018 after the Seoul High Court reduced his term from five years to 2 1/2 years and suspended his sentence.