Karabakh war is over; Armenia agrees to withdraw forces from occupied lands

Tuesday, 10 November 2020 _Yerevan has signed a Russia-brokered deal to end its conflict with Baku over the Nagorno-Karabakh region, committing itself to withdrawal of all its forces from the occupied territories in a move that has outraged Armenians who consider it as “concession of defeat”. 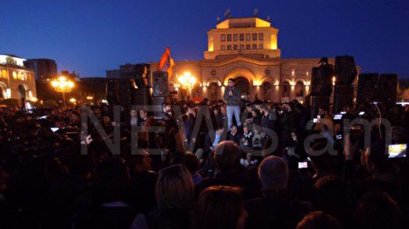 Shortly after the release of a statement by Armenian Prime Minister Nikol Pashinyan late Monday, in which he announced he has signed the ceasefire deal, a huge number of angry protesters demonstrated in Yerevan and even stormed the Armenian government building.

While Pashinyan, in his statement, insists that the ceasefire deal is not a "concession of defeat", Armenia is widely believed to have conceded the defeat in the Karabakh conflict.

The ceasefire deal signed by the presidents of Azerbaijan and Russia and the prime minister of Armenia states that “a complete ceasefire is announced in the zone of the Nagorno-Karabakh conflict from 00:00 Moscow time on November 10, 2020,” and all the hostilities come to an end as of this time.

“The Aghdam region and the territories held by the Armenian Party in the Gazakh region of the Republic of Azerbaijan shall be returned to the Azerbaijani Party until November 20, 2020,” the ceasefire agreement said.

The Armenian prime minister has agreed that his country returns the Kalbajar region to the Republic of Azerbaijan by November 15, 2020, and the Lachin region by December 1, 2020, while leaving behind the Lachin corridor (5 km wide), which will ensure the connection of Nagorno-Karabakh with Armenia and at the same time will not affect Shusha city, which was recently retaken by Azerbaijani forces.