SEOUL, Aug 27, 2014 (AFP) - North Korea has joined the ranks of America's foes who have seized on riots in Missouri, saying the nation is the "graveyard of human rights" and should mind its own business rather than criticise others. 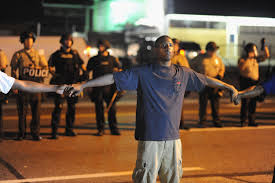 The police shooting of an unarmed black teenager and subsequent crackdown on protesters in the Midwestern town of Ferguson has also given China, Iran and Russia ammunition to sound off about America's flaws.

North Korea, which is regularly condemned by Washington and others over allegations of gross human rights abuses, said the US had no right to pass judgement on others.

"The US is indeed a country wantonly violating human rights where people are subject to discrimination and humiliation due to their race, and are in constant fear that they may get shot at any moment," a spokesman from North Korea's foreign ministry was quoted as saying by state-run news agency KCNA.

"It should not seek solutions to its problems in suppressing demonstrators, but bring to light the real picture of the American society, a graveyard of human rights, and have a correct understanding of what genuine human rights are like and how they should be guaranteed," the spokesman said.

Impoverished but nuclear-armed North Korea has been ruled for more than six decades by the Kim dynasty, which has zero tolerance for political dissent.

The country is estimated to have up to 120,000 political prisoners in its gulags, and those caught trying to flee the country are often sent to jail or executed.

"The US had better... mind its own business, instead of interfering in the internal affairs of other countries", the spokesman said.

The shooting of 18-year-old Michael Brown by a white officer on August 9, and the heavy-handed treatment of protesters, has also drawn barbs from other nations accusing the US of hypocrisy and neglect of its racial divide.

China's state media said that "even in a country that has for years tried to play the role of an international human rights judge and defender, there is still much room for improvement".

Even Egypt -- where at least 1,400 people have been killed in clashes with security forces since July 2013 -- weighed in, saying US police used "excessive" force in the riots that erupted in Ferguson.
Share to
Tags
North Korea ، US ، human rights ، graveyard ، Ferguson
Your Comment