Sunday, 15 November 2020_Thousands of right-wing demonstrators supporting US President Donald Trump have marched through the nation’s capital of Washington, DC to echo his unverified claims of election fraud as he presses ahead with legal challenges in hopes to overturn Joe Biden’s victory. 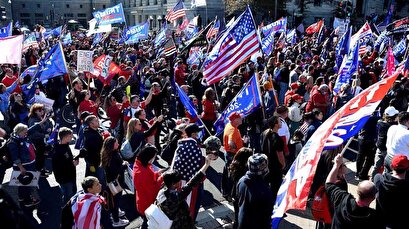 Flag-carrying Trump supporters from across the country came out in force on Saturday to complain of alleged electoral fraud, chanting “Stop the steal!” and “We are the champions!”, as they marched from Freedom Plaza near the White House to the US Supreme Court building on Capitol Hill.

Also taking part in the protest march were many members of the far-right Proud Boys militant group, clad in black with some wearing helmets and ballistic vests.

This is while Trump’s motorcade briefly drove slowly through the march path on the way to his golf course in suburban Sterling, Virginia. Video clips circulated on social media showed Trump, wearing a red baseball cap, waving to his supporters from inside the presidential limousine.

Donald Tarca, who traveled to Washington from West Palm Beach, Florida, carried a massive US flag sporting a giant portrait of Trump, according to a Reuters report.

“I think it was rigged on multiple fronts,” he insisted about the election, adding: “Also the media was so biased that they convinced millions of Americans to vote for Biden. They hate Trump.”

Some left-wing groups reportedly planned counter-demonstrations in Washington on Saturday as well but there were no reports of major incidents.