Friday, 20 November 2020 _An Italian political scientist and international relations expert believes that Joe Biden will stick to his commitment to reenter the Iran nuclear deal “and do so unconditionally.” 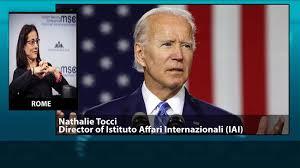 Nathalie Tocci, who was a special adviser to former European Union foreign policy chief Federica Mogherini, made the remarks in an interview with Press TV on Thursday, when asked whether Biden would change the US foreign policy on Iran and rejoin the he Joint Comprehensive Plan of Action (JCPOA) unconditionally?

“Yes, I believe that Biden will stick to his commitment to reenter the JCPOA and do so unconditionally. However, the US’s return to compliance will not be unconditional but will depend on Iranian steps returning to full compliance. In other words, I expect a clean and unconditional return but a conditional step by step compliance for compliance process,” stated Tocci, who has served as the Director of the Istituto Affari Internazionali.

The administration of Republican President Donald Trump has unleashed the so-called maximum pressure campaign and targeted the Iranian nation with the “toughest ever” sanctions.

A critic of Trump’s, the projected winner of the 2020 election, Biden, has said he would return the United States to the Iran nuclear deal as a starting point for follow-on negotiations.

Iran's Foreign Minister Mohammad Javad Zarif has expressed the Islamic Republic's readiness to hold talks on new issues with the US, but said that the country will never renegotiate an issue it has already concluded through negotiations.

Zarif made the remarks in response to Trump, who has been insisting that Iran should give up the 2015 nuclear deal it clinched under the Obama administration with six world powers, and conclude a new agreement with the Trump administration.

Iranian President Hassan Rouhani has said that the new US administration would need to switch from a posture of threats against Iran to one of seeking opportunities with the country.

Share to
Related News
China: US unilateral withdrawal is the root of the Iran nuclear crisis
Barack Obama would “send in the Navy Seals” to remove President Trump
Tags
Biden ، expert ، unconditionally
Your Comment