Friday, 20 November 2020 _Amid a spike in migrants arriving at Spain's Canary Islands, hundreds of migrants have been evicted from the camps set up to receive them, forcing them to wander the streets of local villages. Thousands more are said to have been left stranded without food or water. 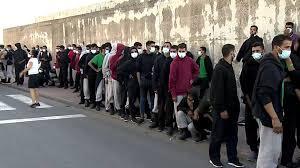 Military camps have been set up to help overwhelmed reception facilities, but local authorities say the government is not doing enough. The island's president Antonio Morales has denounced what he calls, the Ministry of the Interior’s continued contempt for migrants and the island, demanding the resignation of those responsible.

Driven by economic hardship around 17,000 migrants have arrived on the Canary Islands this year. According to Spain’s Interior Ministry that’s a 1,000-percent increase from 2019.

In 2019, 1885 migrants drowned in the Mediterranean sea and 2020’s death toll is fast approaching one thousand. Only last week the Spanish OpenArms NGO reported six deaths after releasing a harrowing footage.

Open Arms, the only NGO permitted to carry out search and rescue missions at present, wrote on Twitter:

“Despite the enormous commitment of our medical team, a six-month-old baby has just died. We requested an urgent evacuation for him and other people in serious conditions, but he didn’t make it. How much pain and sorrow!”

The International Criminal Court has sued the European Union saying member states should be prosecuted for the deaths of thousands of migrants who have drowned in the Mediterranean. In its 245-page document the ICC says the EU’s deterrence-based migration policy which came into force after 2014 sacrifices the lives of migrants in distress at sea, to dissuade others from seeking a safe haven in Europe.