US appoints first ambassador to Venezuela in decade

Friday, 20 November 2020_The United States has appointed an ambassador to Caracas, who will be following Washington’s stance against the elected government of President Nicolas Maduro. 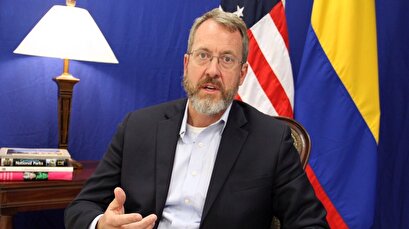 The US Senate appointed James Story as Washington’s ambassador to Venezuela, on Wednesday.

This is the first time in ten years that the US is sending an ambassador to Caracas. The two sides have not exchanged ambassadors since 2010 when relations first started to fray under Venezuela’s late President Hugo Chavez.

The newly appointed US ambassador continued Washington's hardline approach toward Venezuela on Thursday, dashing hopes for a change in the Trump administration’s stance toward the South American country.

"We are going to continue with the pressure and we are going to support the democratic forces and civil society in Venezuela," he said in the conversation.

“While there are energy, gasoline, oil production, medicine problems and the lack of a response to the pandemic, this regime wants to commit fraud in the Dec. 6 parliamentary elections,” he claimed.

“We believe in elections. But what kind of elections? We support interim President Juan Guaido, and the international community will not recognize this fraud, and neither will Venezuelans.”

The Trump administration has increased sanctions on Maduro’s government in recent years in an effort to pressure the Venezuelan leader to step down.

But critics say the heavy sanctions have failed to remove Maduro from power and made life harder for people living in Venezuela.

Story had previously led an American virtual embassy while serving as chargé d’affairs for the Venezuela Affairs Unit in Bogota, the capital of Venezuela’s neighbor, Colombia, where he would carry out the job. He said he hopes to return to Caracas to do his job.

Over the past few year the US has  stepped up its anti-Maduro push by lending support to Guaido in his bid to topple the elected government in Caracas.

It has imposed harsh economic sanctions on the oil-rich country and confiscated its state oil assets based in the US, channeling the funds to Guaido.