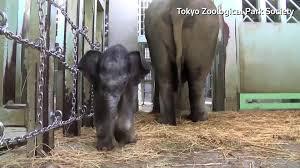 The male calf was born on October 31 to mother Authi and father Artid, two elephants that were sent by Thailand to Japan in 2002 as a gift to celebrate the birth of Japan's Princess Aiko, the only daughter of Emperor Naruhito and Empress Masako.

It is the first elephant born since the zoo opened 138 years ago in 1882. The baby measured about 100 centimeters tall and weighed 120 kilograms at birth. A video of the elephant shows him playfully trotting around his mother and eating hay and grass. Artid, the father died in August due to tuberculosis.

The zoo is now asking the public to vote online to name the baby with a Thai name.