Thursday, 03 December 2020_Moon samples collected by the lander-ascender combination of China's Chang'e-5 is likely to bring new findings of the formation and evolution of the moon as they were gleaned from the Ocean of Storms, an untouched area of the astronomical body. 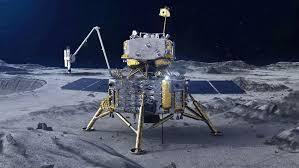 The Chang'e-5 probe on late Tuesday touched down on the designated location in the north of the Mons Rumker in Oceanus Procellarum, also known as the Ocean of Storms, on the near side of the moon.

By early Wednesday, the lander-ascender combination has finished the tasks of moon sample drilling and packaging, all done in an untouched area of the moon.

In space explorations, samples have always proven to be solid evidence in deducing planet history.

Earlier in the 1960s and 1970s, the United States made six landings in the Sea of Tranquility, bringing back 382 kilograms of rocks and mud samples.

Three similar explorations were also carried out by the Soviet Union, which brought back samples weighing about 335 grams.

The samples together brought earth scientists a step further in unveiling the evolution of the moon, proving that it was formed in the collision of earth and another asteroid.

Peng Jing, deputy chief designer of Chang'e-5 probe with the China Academy of Space Technology, said they hold high hopes that the samples collected this time will open new perspectives for moon scientists.

Compared to the Soviet and American samples, which were mostly formed three to four billion years ago, the samples gathered from the Ocean of Storms this time will be relatively young, said Peng.

"China's scientists said it requires samples from different (geologic) ages to piece together the full history of the moon. Analysis has shown that the samples we could gather from the designated northwest area of the Ocean of Storms are rather new. Together with the more ancient samples, we could gain a better knowledge of the formation and evolution of the moon," he said.

Commentating on China's recent space operations, James Head, a professor of geological sciences at Brown University, echoed Peng, saying that "these samples are actually going to tell us how young the moon had volcanic activity, which is an indication of how recently it has been geologically active, a critical question in the evolution of the planets."

This time, Chinese scientists are also aiming for a higher ambition, planning to bring back about two kilograms of samples at one time, a figure that is exponentially higher than the 330 grams gradually gleaned by the Soviet Union using three probes over three times.

In the past, the amount of samples collected is largely confined by the heavy burden brought by the fuel. This time, Chinese scientists formulated a new approach, allowing the samples to be transferred as Chang'e-5 ascender docks with the orbiter-returner combination in orbit.

The world's leading magazine Science called the process of collecting the samples "a complex deep-space ballet" as all the process will be done automatically -- a technological challenge.