Raging wildfire in south California forces over 25,000 residents to evacuate

Saturday, 05 December 2020_The uncontrolled wildfire in southern California has forced over 25,000 residents to evacuate their homes as strong winds push the fire towards suburban areas. 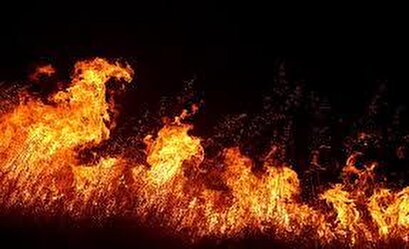 The out-of-control blaze started on Wednesday from a house fire and quickly spread burning through thousands of acres of land with only 10 percent of the wildfire being effectively controlled as of Friday morning according to local fire departments.

Around 500 firefighters and 11 helicopters have been dispatched from around the country to stop the spread of the devastating fire which has already burned over 26 square kilometers of land.

Several homes and buildings have been destroyed while two firefighters were injured battling the blaze.

Several strong wildfire spots have been controlled after firefighters worked through the night, however strong winds pose greater challenges in containing the fire, said Captain Paul Holaday of the Orange County Fire Authority at a press conference.

"As of this morning, firefighters worked through the night, extinguishing hot spots, mapping up around structures and stopping the forward spread of the fire. At this point, I’ll show you the map here. The fire started up there where we've called division Bravo Yankee Break, up in Silverado Canyon, and as the wind pushed, it pushed southeast towards Lake Forest, and then it split when it hit Modjesca and move up northwest to the cities of Orange. We've done a great job last night in stopping the forwarding of the forest fire and we're working on mopping it up," said Holaday.