Monday, 07 December 2020_Israeli forces have closed a number of the main entrances of the villages in the occupied Golan Heights of Syria, barring the locals from reaching their farms, where the Tel Aviv regime wants to set up wind turbines. 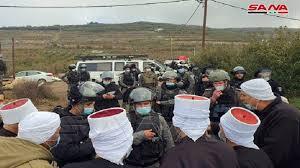 Syria's official news agency, SANA citing an unnamed local source, announced the news on Monday, adding that crowds of locals in rural areas of Majdal Shams, Sheita and Baqaatha, and Masada were gathering on the blocked roads leading to their farms.

The source added that Israeli soldiers were present in the areas in large numbers and had already cut off the main roads there.

It further said that infuriated locals spread in their agricultural lands to prevent the regime from installing the colossal turbines.

Separately on Monday, Sidqi al-Maqt, an activist from the Druze community in the Israeli-annexed Golan Heights, said in a statement to the Syrian TV Channel that inhabitants of Golan would never allow Tel Aviv to carry out its scheme on their farms.

Magt, who spent several years behind bars in Israeli prisons before his release, added that Golan villagers would defend their lands against the occupation forces, no matter what the price would be, SANA reported.

He stressed that the people of the Golan would continue their struggle against the occupiers till the liberation of every inch of the occupied Syrian Golan Heights.

In 1967, Israel waged a full-scale war against Arab territories during which it occupied a large swathe of Syria’s Golan and annexed it four years later, a move never recognized by the international community.