20 more Republicans, including McCarthy, join Texas bid to overturn the US election 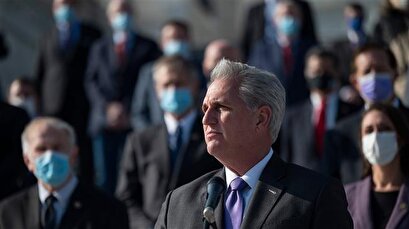 The Texas lawsuit, which is now being backed by Republican attorneys general in 17 states and 126 congressional Republicans, including Minority Whip Steve Scalise (R-La.), has been described as the most coordinated effort to overturn an election in recent American history.

Biden was declared the projected winner by the media of the November 3 presidential election.

Texas Attorney General Ken Paxton filed the lawsuit at the Supreme Court on Tuesday, asking the justices to throw out the voting results in the four states over their expanded use of mail-in voting during the COVID-19 pandemic.

"Presently, evidence of material illegality in the 2020 general elections held in Defendant States grows daily," the charged the Texas suit.

“Texas’s request to disenfranchise tens of millions of voters who reasonably relied upon the law at the time of the election does great damage to the public interest,” Pennsylvania argued in a response filed Thursday afternoon. “Nothing in the text, history, or structure of the Constitution supports Texas’s view that it can dictate the manner in which four sister States run their elections, and Texas suffered no harm because it dislikes the results in those elections.”

This is while 21 states had filed objections, describing Texas’ request as unconstitutional, unfair and outrageous.

“What Texas is doing in this proceeding is to ask this court to reconsider a mass of baseless claims about problems with the election that have already been considered, and rejected, by this court and other courts,” Josh Shapiro, Pennsylvania’s Democratic attorney general, wrote in a filing to the high court.

“Let us be clear,” the brief continued. “Texas invites this court to overthrow the votes of the American people and choose the next president of the United States. That Faustian invitation must be firmly rejected.”