OPCW has become a tool in the hands of US, allies: Syria’s deputy FM

OPCW has become a tool in the hands of US, allies: Syria’s deputy FM

Saturday, 12 December 2020 _Syrian Deputy Foreign Minister Bashar al-Jaafari says the Organization of Prohibition of Chemical Weapons (OPCW) is being manipulated by the United States and its allies, emphasizing that his country’s chemical dossier must be closed as Damascus has fully complied with its relevant obligations. 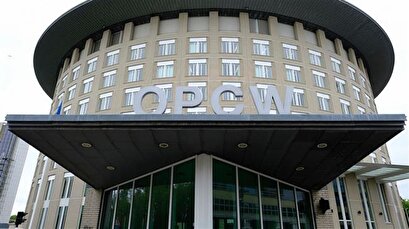 “Syria condemns the use of chemical warfare and all weapons of mass destruction (WMD) at any time, place and under any circumstances. I reiterate that the OPCW has lost its identity as a technical organization tasked with safeguarding the Chemical Weapons Convention, and has instead turned into a tool in the hands of the US and its allies,” Jaafari said at a United Nations session on the situation in Syria via a video link on Friday.

He called on OPCW member states to reject any politicization of the technical feature of the organization as such an approach undermines the status and credibility of the international body.

Jaafari stressed that Syria has never used chemical weapons and is closely cooperating with the OPCW, its technical secretariat as well as assessment team to settle all lingering issues and completely close its chemical file away from any political hullabaloo or media hype.

Syria surrendered its entire chemical stockpile in 2013 to a mission led by the United Nations and the OPCW.

On April 7, 2018, an alleged chemical attack hit the Syrian city of Douma near the capital Damascus. Western countries were quick to blame it on the government of President Bashar al-Assad.

A week later, the US, Britain and France launched a coordinated missile attack against sites and research facilities near Damascus and Homs with the purported goal of paralyzing the Syrian government’s capability to produce chemicals.

German President Hands Merkel Notice About End of Her Term

EU threatens to freeze financial support for Sudan after coup

Axios: Company says it will put Trump back online

Guterres: I thank the Islamic Republic of Iran for holding the Afghanistan Summit