Putin: Talks to begin with Iran on free trade agreement with EAEU

Sunday, 13 December 2020_Russian President Vladimir Putin has announced plans to boost ties between the Eurasian Economic Union (EAEU) and countries such as Iran, saying negotiations have begun with Tehran on a free trade agreement. 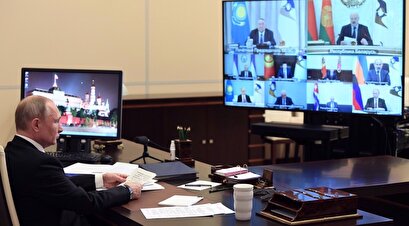 Speaking at a meeting of the Supreme Eurasian Economic Council on Friday, Putin announced that a decision would also be taken to provide observer status to Uzbekistan and Cuba.

"An agreement on cooperation between EAEU and such economically large countries as China, India is being implemented," he said. "The first round of talks on a free trade agreement with India will be held shortly.”

"Today we will approve the launch of similar talks with Iran," he added, noting that the idea of making preferential agreements with Indonesia and Mongolia is also welcome.

The EAEU is an economic union of states located in Eastern Europe as well as Western and Central Asia. It has five members – Russia, Kyrgyzstan, Kazakhstan, Belarus and Armenia – with 180 million people and nearly $5 trillion in combined GDP.