Iran not excited about Biden’s election, but happy with Trump’s departure: Rouhani

Wednesday, 16 December 2020_President Hassan Rouhani says Iran is not excited about the election of Joe Biden as US president, but is happy with the departure of Donald Trump, the “most rogue” and “law-breaking” American leader so far, who did not even abide by humanitarian principles in dealing with the Iranian nation. 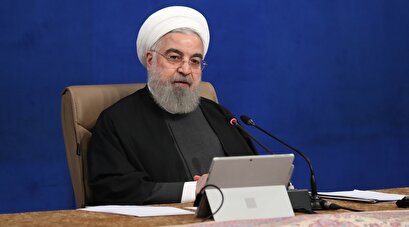 “We are by no means excited about [Joe] Biden coming to power, but we are happy with Trump leaving as a person who [even] blocked the provision of vaccines for patients; we are happy because he did not even adhere to moral and human principles,” Rouhani told a cabinet meeting in Tehran on Wednesday.

He also stressed that today’s situation is completely different from that of 2015, when long-running negotiations culminated in the nuclear deal, officially called the Comprehensive Plan of Action (JCPOA)/

“In 2015, when we were negotiating the JCPOA, the sword of six resolutions was over our head, but today this sword is broken. At that time, a second sword called the PMD (possible military dimensions) was also over our head which does not exist today,” Rouhani said.

The JCPOA was signed between the Islamic Republic and the P5+1 group of countries, the US, the UK, France, Russia, and China plus Germany, and ratified in the form of Resolution 2231.

However, Trump unilaterally pulled his country out of the JCPOA in May 2018 and reinstated the anti-Iran sanctions that had been lifted by the deal.

The Trump administration also unleashed the so-called maximum pressure campaign and targeted the Iranian nation with the “toughest ever” restrictive measures.

Following Washington’s exit from the deal, the remaining European parties failed to fulfill their end of the bargain under US pressure, prompting Iran to move in May 2019 to scale back its JCPOA commitments under Articles 26 and 36 of the accord covering Tehran’s legal rights.

US president-elect Biden has, however, pledged to rejoin the accord, which was inked when he was vice president.