Friday, 18 December 2020_An Afghan Taliban delegation is in Pakistan to discuss peace efforts. The delegation is headed by Mullah Baradar, the head of Taliban's political office in Doha. 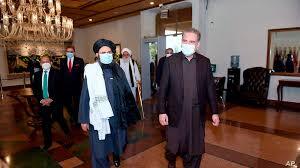 The Taliban leaders met Pakistani Prime Minister Imran Khan, who assured his country's all-out support for the peace process. The visit comes after Taliban and Afghan government took a 20-day break in their talks taking place in Doha.

After months of negotiations, the two sides recently agreed on the rules of engagement. But there is no progress on a comprehensive ceasefire as the Taliban have linked the truce with peace deal. But Pakistan’s foreign minister, who also met the Taliban leaders, said Taliban have shown their readiness to seek an end to the war.

The Afghan Taliban and the US signed a landmark deal in February this year. The deal outlines a road map for the US troops withdrawal from Afghanistan. In return, Taliban agreed not to allow Afghan soil to be used again by terrorist groups.

Given Pakistan’s historic ties with the Taliban, the US and Afghan government expect Islamabad to ensure the Taliban live up to their commitment. At the moment, all eyes are on the incoming US president as to whether he will follow the same policy on Afghanistan or take a different course.

On paper, there seems no change in the policy of US President-elect Joe Biden with regard to Afghanistan, but he may not hasten the troops’ withdrawal as sought by President Donald Trump. This means the situation in Afghanistan will remain uncertain at least in the foreseeable future.